Bill Dixon (left) with Dr Jens Gerhardt CEO of HanseYachts AG signing their contract on the Sealine Stand at the London Boat Show. 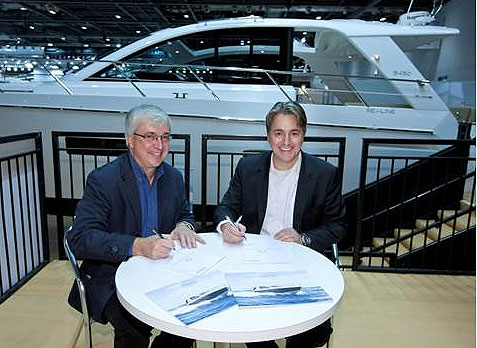 Leading motor boat builders, Sealine International, are delighted to announce that they have appointed award winning international designer Bill Dixon to work with their in house design team in creating of a new range of innovative Sealine models. The first of these will be launched in the autumn of 2014.

As a young naval architect working for Angus Primrose Design in the early 1980s, Bill Dixon faced a significant challenge to keep things going following Primrose's untimely death at sea. Some 30 years later Bill now heads a leading international studio with an impressive range of credits to its name including yachts for production boat builders such as Moody as well as major custom sail and motor yacht projects built at shipyards throughout the world. His studio is based at Swanwick near Southampton and Bill is still very much a hands-on designer.

Commenting on the appointment Dr.Jens Gerhardt, CEO of HanseYachts AG, who acquired the Sealine brand in 2013, said "During its 40 year history Sealine has gained a well-deserved reputation for creating award winning production motor yachts that break boundaries with their cutting edge designs. We believe that Bill, a British designer, is the perfect choice for the Sealine brand in helping to create a range of models that will remain true to the Sealine ethos of space, light and freedom with an emphasis on practical functionality. Sealine has always been considered as a ‘boater's boat' and this will remain at the core of our new designs. We are thrilled to have Bill as part of our team."