Caption to Photo: Diver Raniero Borg, with a bouquet of flowers in hands, approaching the statue of Kristu tal-Bahhara (Christ of the Sailors). (Photography: Kurt Arrigo). 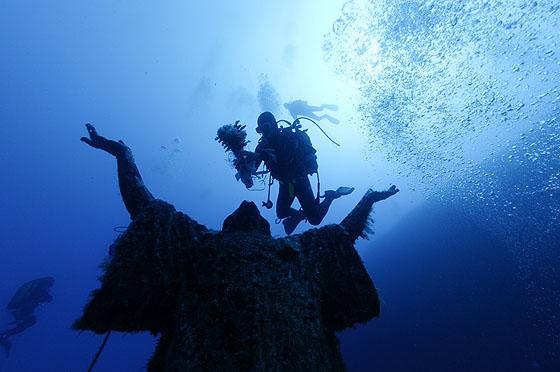 On Sunday 23rd May, a Mega Dive was orgainsed by Raniero Borg in commemoration of the 20th anniversary from the founding of the statue of Kristu tal-Bahhara. Mr. Borg had come up with the idea of placing a statue of Christ on the seabed at St. Paul's Bay, which statue was blessed by Pope John Paul II in 1990. After 10 years this statue was moved from St. Paul's Bay to Qawra point, lying at 35 metres, as part of a better diving attraction together with the MV Imperial Eagle.

The aim of the Mega Dive was to bring together as many divers to have one dive around this statue. On the day, 40 divers from various diving schools and of various nationalities participated. Flowers were placed by Mr. Borg on behalf of the group. This initiative was a success and all those who joined enjoyed the event. After the dive the divers were greeted with a Maltese platter and wine as part of this commemoration.

Organiser Raniero Borg thanked the Malta Red Cross and the Malta Civil Protection, who were on site at all times, the photographers, camera-men, Attard & Co of Marsa for the wine, Tal-Petut of Birgu for the food and all participants for making this occasion a success.